Kenny Koala, since his induction into the Avida RV Club in July 2007, has had some magical adventures and some hair raising moments!

He has travelled to far North Queensland, around the Apple Isle, ventured to the Red Centre, meandered along the Great Ocean Road and to many other amazing destinations around Australia.

As far as the club is aware (we are sure there is a lot more that has gone on behind closed doors) Kenny has been kidnapped and held for ransom, had a baby with a cat named “kinka”, learnt how to fly a plane, married and divorced, has had a sex change operation (twice), has an alcohol problem and stolen a car – so much like Australia’s Waltzing Matilda we have chosen a truly upstanding citizen to be our mascot!

Kenny was introduced as the Avida RV Club mascot to assist in raising funds for the Royal Flying Doctor Service. Kenny is now working towards helping more charities at future events. 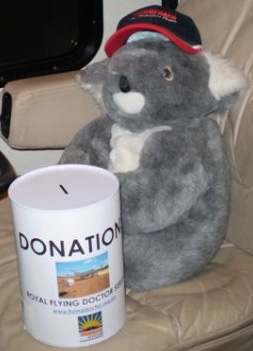 Kenny looks forward to meeting you all out & about on the road!